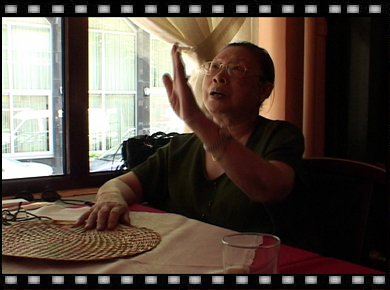 Istanbul’s China Restaurant is the oldest Chinese restaurant in Turkey. Its founder, Wang Zhengshan, fled China with his family in a dramatic trek over the Himalayas in 1949 when Chinese Communists took power, thereby earning a place in the urban legend as the man who “walked from China”. Wang died in 1961, leaving his widow Fatima and eight children struggling to survive. Now as Fatima contemplates retiring, the restaurant faces an uncertain future.

I fell in love with Istanbul when I first visited it in 1976.  Could it have been the East-West intrigue? I had dinner at the only Chinese restaurant in the country, and according to Let’s Go Europe, China Restaurant’s owner had “walked from China”.  I never met Wang Zhengshan— he died in 1961—but  Yakar served me that night.  Twenty-five years later in Toronto, by happenstance, I met a Muslim woman who pointed me in the right direction and allowed me to track down the man’s family, now scattered across the world in Mexico, Malaysia, Taiwan and Turkey.

Dusk comes to Istanbul. Commuters are going home on Galata Bridge, fishmongers closing shop by the Golden Horn, evening prayers at the Blue Mosque, and Yakar chatting with restaurant neighbours. I had Antonioni’s closing shot in The Passenger in mind: Hotel de la Gloria at the end of the day but with Turkish music. China Restaurant would soon close for good—but for now, life goes on, as it has been for the last forty years that Yakar has worked at the restaurant.  As for the cat that comes into frame?  It was purely a Truffaut moment and totally un-staged.

In the summer of 2002, you could not have walked down Istanbul’s Istiklal Caddesi without hearing Sezen Aksu’s new album Deli Veren blaring over speakers of record stores.  Even little old ladies selling bootlegged cassettes in the laneways got into the act.  Aksu has been a stellar pop diva in Turkey and Europe for many years, but she broke new ground that summer experimenting with her Turkish musical roots—that wonderful blend of Persian, Arabic, Central Asian, Kurdish and Jewish musical traditions. Vine mi Cicek was inspirational when we were cutting the episode’s final end-of-day sequence.