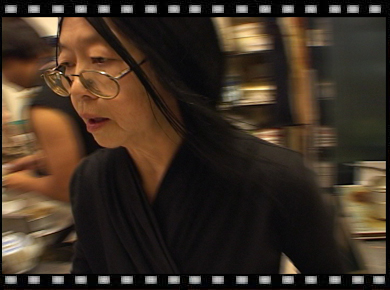 The Golden Dragon, started in 1947 by community activist Lam Al Ying, is Cape Town’s first Chinese restaurant. Ying’s widow and his daughter now continue his legacy. Through the mother-daughter team we glimpse a country struggling to address the bitter injustices and betrayals of its apartheid past. Strangers in a strange land who kept to themselves, the divided Chinese community is only now shaking off its confusion to claim its place in the new South Africa.

Edna Ying’s late husband opened the first Chinese restaurant in Cape Town.  People from as far as Mauritius and Madagascar told me that Edna now runs the Golden Dragon, a reincarnation of that original restaurant on Pardee Island.  I found the eatery easily, but it was considerably more difficult getting Edna to talk about that dark period of apartheid history when Chinese South Africans like her were not “white enough to be white or black enough to be black.”  Six months after I visited Cape Town, Edna told me she had reverted to her Chinese given name, Onkuen.

The Cape of Good Hope is not the southernmost land of the African continent.  Neither is Cape Point where I had taken Onkuen.  That honour belongs to Cape Hangklip, some 100 kilometres across False Bay, which you can see in this closing shot.  When I was young, I had learned about the great European explorers who rounded the Cape on their way to India.  I was determined to take Onkuen to this magical landmark standing on the confluence of the Indian and Atlantic Oceans, a landmark she had never visited despite having lived in Cape Town all her life.

To me, The Untold Story epitomizes the struggles of South Africa.  The music is featured in the documentary film Amdala! Revolution in Three Part Harmonyand we used it as our guiding track during editing.  Both earthy and spiritual, the song seems to embody the hopes and struggles of an entire continent.  Onkuen was pensive during our visit to the Cape, perhaps pondering her place in the post-apartheid South Africa.  The piano solo that underscores our final scene, as our camera pans across the seascape where two oceans meet, is reflective of her mindset.  She is also between two worlds.