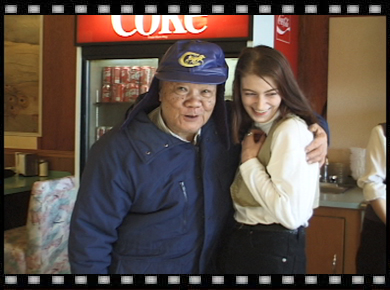 Chinese workers came to Canada in the 19th century to build the trans-continental railroad, but by 1923, the country had kept Chinese immigrant workers out, as their services were no longer required.   Against these odds, Jim Kook came to the Prairie town of Outlook, Saskatchewan as a “paper son” using a dead Canadian’s identity.  The gregarious “Noisy” Jim soon became the most popular man about town and ran his New Outlook Café for forty years until his recent death.

My friend Tony Chan featured Noisy Jim in his groundbreaking 1985 documentary Chinese Cafés of Rural Saskatchewan.  In 1997, I had travelled with Paul Wong, a Vancouver video artist, to seek out Jim in Outlook.  Now in the first year of the millennium, the New Outlook Café is my first ‘port of call’ of the series.  It was the coldest winter in memory and Kwoi’s camera cables kept freezing over.  A moisture spot would develop in the middle of the camera lens when we stepped outdoors.  I told him to shoot away anyway, adding an alternate version of cinema verité.

Two years after we left Outlook, I called to arrange a return visit to the town to get more footage of Noisy Jim.  Ruby, the café owner from Jim’s village, told me that Jim was seriously ill in the hospital but that she would let me know if his conditions changed.  Jim died a week later. I flew out to Saskatoon as soon as Ruby called, arriving in Outlook the next day with only hours to spare.  I dropped in on the café on my way to the funeral with my little Sony camera to film the empty dining room.

On The Way Home: Neil Young

On the Way Home came to mind when I was driving from Saskatoon through harvested fields in the late afternoon sun under a wide open sky on the way to Noisy Jim’s funeral.  Neil Young’s music has that homey, small-town prairie feel to it.  And I was, in a sense, going home to a ‘Gold Mountain’ uncle.  My three encounters with Noisy had been like that, going back in Chinese Canadian history to the warmth of my grandfathers and uncles who built the railroad and to the familial food they served in Chinese cafés. Jim, too, was also going home.