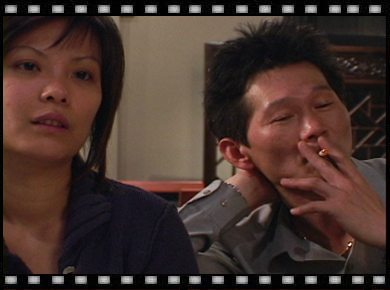 In Tromso, Norway in the land of the midnight sun, Michael Wong and his wife Ting have opened one of the very few Chinese restaurants inside the Arctic Circle, the Lille Buddha. As the owner couple promotes their Hong Kong-style efficiency on the Norwegian waitresses, the Chinese kitchen staff openly discusses their lives as Chinese restaurant workers in Europe — how they first entered Europe illegally and the loneliness away from home.

I had heard about Michael Wong’s restaurant from a friend of mine who spent two years in Tromso. Having only talked to Michael on the phone, I wasn’t sure how he would react to our film crew, so I told Kwoi to keep his camera in the hotel room on that first night.  Our precaution turned out to be unnecessary. Michael, his partner Ting, and his chefs proved to be as colourful as any character from a John Woo movie.  We drank well into the morning, and I regretted not having our cameras there to capture the spontaneity of the moment.

Since we had just spent a week in the vibrancy, aroma and cacophony that define Istanbul, it was  quite a contrast when we landed inside the pristine Arctic Circle after stops in Heathrow and Oslo.  The air was fresh but scentless. Heavy cloud cover would block the sun during most of our stay, but the chilly Arctic wind justified the leather jacket I had recently bought at a Turkish bazaar.  Kwoi and I meanwhile had to solve a pressing problem: how to show the midnight sun? We filmed from the middle of the street as bar patrons staggered out at closing time.

We are in the world of ambient mixes and remixes.  This eponymous compilation of chill-out music came straight from what DJs play at Buddha Bar in Paris.  Angelic Voice reminds me of the music I heard while surfing the Internet and nursing a beer in a nocturnal bar in Tromso, only this was in the middle of the day.  Day and night in the Arctic summer no longer mattered.  Our sleep pattern had been turned upside down.  Unable to sleep at three in the morning, Kwoi and I went out one night around the city filming seagulls and empty streets.