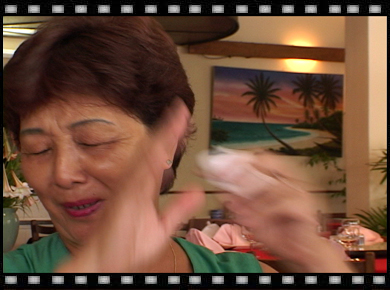 Did the Chinese come Madagascar in the 15th century, years before the Europeans? And how have recent immigrants integrate in the most multicultural country of the world? These and other questions are answered as we visit Restaurant Le Jade in Tamatave, the port city with a large Chinese population. More traces of Chinese settlements are revealed as the filmmaker visits the oldest Chinese immigrant on the fourth largest island of the world.

I never knew there were Chinese in Madagascar until I saw the Hong Kong TV series Stories from Afar.  On my first visit to Tamatave, I even met and became friends with Mr. Shum, the man featured in the series.  Shum, a métis who taught Chinese in the local Chinese school, was also caretaker of the Chinese temple in town.  When I went back to the temple with my crew six months later, he was gone.  “Shum has fallen ill and went back up the mountains,” the new caretaker told me in French.  I lit incense and prayed for his good health.

I couldn’t believe my eyes when the métis schoolgirl wrote her Chinese name on the blackboard in perfect and graceful characters under the watchful eyes of her Chinese-métis schoolteacher.  We are in Tamatave Chinese School, established in the 1920s by the Chinese community to educate their children.  Mr. Liu had shown me a yearbook from the fifties in which all the text is in Chinese and the school administration swears allegiance to the government in Taiwan. The school now teaches in French and Malagasy but offers Chinese as an after-school activity—for those who are not busy in the playground.

The first settlers to Madagascar migrated from the islands of Indonesia in the third century.  Contrary to the romantic view that they had rowed across the Indian Ocean, it is now believed that they came by land via the Middle East and East Africa.  Malagasy music incorporates musical influences from around the Indian Ocean, including its Indonesian and Arabic heritage.  Searing political commentary has often defined Tarika and the band’s founder Hanitra Rasoanaivo. Their 1997 album Son Egal, where Sonegaly comes from, carries a strong socio-political message. The group’s 2001 album Soul Makassartraces the deep links between Madagascar and Indonesia.