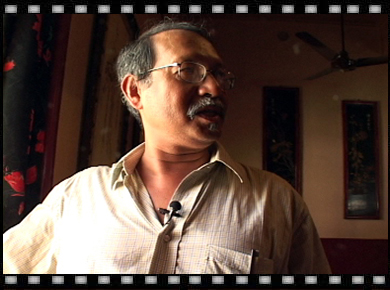 The brothers Nini and Baba Ling grew up as in a Chinese-Indian family. While Nini inherits his father’s Bombay restaurant, Ling’s Pavilion, his brother branches out into Delhi, opening the Imperial Garden. Both establishments enjoy success by strictly using the freshest ingredients in their cooking. As Nini contemplates his retirement, Baba is forging ahead with the ambitious construction of Nanking, the re-incarnated name of a landmark restaurant his father established in 1947, the year India gained independence.

The Iraqi War started while I was asleep near Amsterdam airport. Northwest had cancelled my flight to Mumbai that morning because they could not get the extra crew to fly around the closed airspace.  I immediately switched over to KLM whose flight to Delhi took a northerly route through Russia, thus bypassing the war zone.  Arriving in the early hours of the morning, I caught a few hours of sleep before going over to the domestic airport for an early morning flight to Mumbai. “It’s about time you show up,” Kwoi intoned mischievously as we met for breakfast at Juhu Beach Holiday Inn.

End-of-day on Juhu Beach, sunset over the Arabian Sea… Kwoi and I were to meet up in Mumbai to begin our three-week shoot.  Travelling westward through Hong Kong, Kwoi arrived as scheduled.  I would arrive twelve hours late, having travelled eastward via Amsterdam and diverted to Delhi. Fresh off the plane that evening, Kwoi grabbed the camera and captured these serene moments on the beach.  While the spectre of SARS and the foreboding of the Iraqi War would hover uneasily over us for the rest of our trip, these became precious and fleeting moments of our “Passage to India”.

It was the end of my three-week research trip to India.  I was having dinner with Ajay and his wife Sarada at a new-age restaurant on Juhu Beach when this track and the rest of the chill-out music from Krishna Beats came oozing over the sound system.  This was Mumbai at its most hip. We sat next to a colour-changing sheet of a waterfall and the food was post-modern fusion, just like the music.  We could have been anywhere: London, Berlin, Tokyo, except this was my last evening in India and I was already drunk with nostalgia for the country.