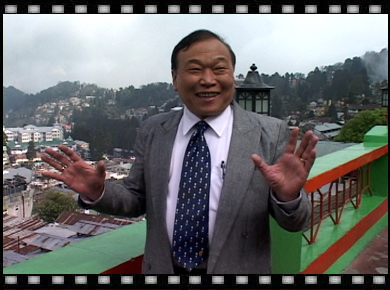 Samson, Richard, Samuel and Stephen Yeh were born in Calcutta and suffered from the aftermath the 1962 Sino-Indian border conflict. Today, the four brothers take turns running the New Embassy Restaurant in Calcutta and Hotel Restaurant Valentino in the Himalayan hill-station of Darjeeling. As they reminisce what it was like to grow up Hakka Chinese in India, the next generation’s emigration to the West has decimated the once vibrant and prosperous community.

The ubiquitous yellow-and-black taxis, albeit not air-conditioned, can be an oasis of calm in Calcutta.  They took us to old Chinatown.  They took us to Victoria Memorial now a museum inside Calcutta’s green lungs, the Medan.   And they took us to Howgrath Bridge and the adjoining flower market.  The flower market was beautiful and vivid, but filming at the ugly, grey bridge proved to be a challenge, since we were chased out by the police.  Apparently, bridges, train stations (as we learned in Mumbai) and government buildings were all off limits to our cameras in these post-9-11 times.

Having just flown in from Darjeeling, we had an afternoon layover in Calcutta.  I decided to drop by at the Yeh Tannery in Tangra near the airport.  Jessica Yeh, whom I met in Toronto, took us around the new Chinatown.  After paying our respects to my spiritual ancestor at the local Guan Di temple, we filmed amid dirty sewers and smelly tanneries run by Calcutta Chinese, ending at this busy intersection at sunset.  That evening in an unassuming restaurant, before departing for Delhi, we were treated by Jessica’s father to one of the besthakka meals I have ever eaten.

Ravi Shankar’s raga with the London Symphony has that haunting mood I was looking for to emphasize the tension felt in the Chinese community during the 1962 Sino-Indian border skirmish. Our composers captured this mood beautifully in their composition Calm Before the Storm.  I first met Raj Rangayyan and Utpal Mazumdar in Calgary, where they were working as an engineer and a city planner respectively.  They recorded ragas in their spare time with Raj playing the bamboo flute bansuri and Utpal at the tabla. Their CDs have such timeless and unhurried titles as In Tune With You, In You Have the Time… and Listen, Honey…