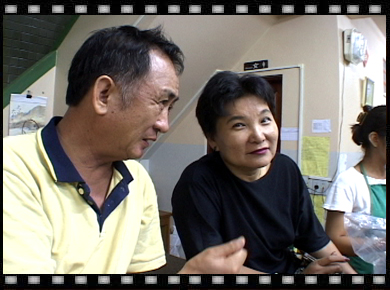 In the frontier city of Manaus, on the great Amazon River, Taiwan immigrant Jack Sun has been running the Mandarin for thirty years. Jack Sun came to Brazil in 1967, when he was a young man, to build his life in the resource-rich country. Meanwhile, his business-savvy US-educated son, Eddy, navigates his own unique identity as a Chinese Brazilian in the Amazon — Chinese in heart, but Brazilian in spirit.

I have always wanted to ride on the legendary Amazon ferries that ply the great river, imagining that I would find a Chinese restaurant owner just like the Klaus Kinski character in Werner Herzog’s Fitzcarraldo.   To get to the ferry docks of Manaus for my rendezvous with Jack Sun, I started with the legendary opera house and slowly made my way through the busy electronic goods store and sleazy beer and pool stalls by the waterfront. I had tracked down Jack through his brother in Sao Paolo and joined him on the ferry for a river tour with visiting Chinese tourists.

There is a romantic temptation to sail up the Amazon River on one of its overnight ferries, towards Colombia and Peru. I could trade stories with fellow passengers in the cool breeze during the day and sleep in a hammock under the stars at night.  But that would have taken days out of our shooting schedule.  Sitting by the dock of Manus was the next best thing to do. I was able to feel the pulse and the rhythm of the great river as ferries dock and undock, loading and unloading their passengers and cargoes, and occasionally sailing into the sunset.

Lani Hall was the voice behind Sergio Mendes’ Brasil ’66.  It was years later that I found out she is American and learned her Portuguese lyrics phonetically for those bossa nova tunes that I so loved during my youth in Japan.  Tres cururmins is from her 1998 solo album Brasil Nativo, featuring musical roots of European settlers, indigenous Indians and African slaves.  The song is an ode to the Brazil of the Native Indians with references to the legends from their culture and is the inspiration behind the composition we eventually used in the opening Amazon boat ride sequence.