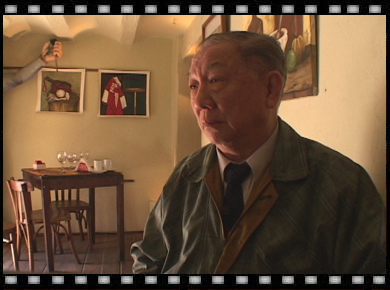 77-year old Foo-Ching Chiang came to Buenos Aires in the 1960’s and became the “Spring Roll King” of Argentina.  His Casa China is a restaurant and cultural center bridging Argentinean and Chinese cultures.  Chiang’s fervent ideal of internationalism is tempered by his own solitude.  While his family lives elsewhere in this planet, he lives his remaining years amidst the melancholy music of the seductive tango.

The opening tango sequence was filmed at Niño Bien on our last night in Argentina. ‘Niño bien’, as explained to me, is a term for spoiled ‘good sons’ from upper class Buenos Aires families, probably dancing in the milongasevery night until dawn.  We came to Argentina to search for the tango and to look for a Chinese restaurant owner who could take me to the spirit of this haunting dance. Kwoi had come to Buenos Aires the previous Christmas and found Chiang at Casa China.  Although not exactly the tango-dancing type, Chiang comes close.  He epitomizes the loneliness and melancholy of the tango.

The end credit sequence is my homage to Wong Kar Wai, who had filmed at Bar Sur in Happy Together.  We walked to the bar after a parilla dinner with Chiang.  The rain had by now let up, but the evening remained cool and the cobblestones wet.  Our visit to Buenos Aires was coming to an end. However, I was reluctant to say goodbye as I watched Chiang through the camera, cigarette dangling from his mouth, standing alone.  Chiang took a taxi home and into the night as we went in search of another milonga, unable to say goodbye to Argentina.

I came upon Astor Piazzolla quite by accident, having bought his Sur el Viajealbum in a Buenos Aires CD shop. I found out that he is the father of modern tango featured in works by Carlos Saura, Wong Kar Wai and Yo-Yo Ma.  I used two of Piazzolla’s tracks from the album: Vuelvo al sur (also featured in Robert Duvall’s Assassination Tango) and El viaje, the instrumental version of which is featured in the opening sequence at Niño Bien.   My composers added their own beautiful tango tracks, my favourite of which is Tango al meurte, the piece that closes the episode.